Marshawn vs The Media 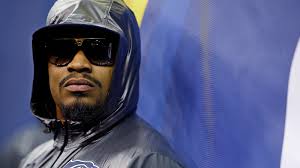 By Brendan Johnson
One of the largest stories plastered over the entire face of ESPN is Marshawn Lynch refusing to speak to the media and the NFL’s fines that have been laid upon him.
Lynch had been fined three consecutive times for $20,000 dollars as a consequence for not coming to media day. Lynch has now come to two of the following meetings, saying only, “I’m here so I won’t get fined.” This has raised quite a few questions for the public and sports analysts. Is this legal to continue fining him? Why is it such a problem for Lynch to refuse to speak to the media? And also, how will Lynch and the League handle this situation in the future?

Apparently, it is in all NFL contracts to speak to the media for a minimum of 5 minutes on media day, and as a public figure, some feel that Lynch is obligated by a standard of status, not just his contract. But does this take away from the simple fact that he is a human being who wants his privacy? Every person deserves basic rights, and privacy is one of them. The NFL shouldn’t be forcing players to speak if they don’t want to. Many players have their own personal reasons, and Lynch’s is that he has had bad encounters with the media. He believes they try to trap him and twist his words, and that has been true in the past.

The major issue is the violation of the basic rights of people. Is this something that the NFL needs to change about their contracts with players? If a player has a reason for not wanting to speak, then let them hold their peace. It isn’t affecting anyone. If Lynch doesn’t talk, then the media can write about someone else. There is enough happening in the NFL to avoid one player.

The bottom line is that Marshawn Lynch is a human being, and that should supersede anything else. Give him his privacy, and let him be on his way. Don’t fine him thousands of dollars just because he doesn’t like the media and refuses to speak for five minutes.