Farmers Shoot but Miss Against Spartans 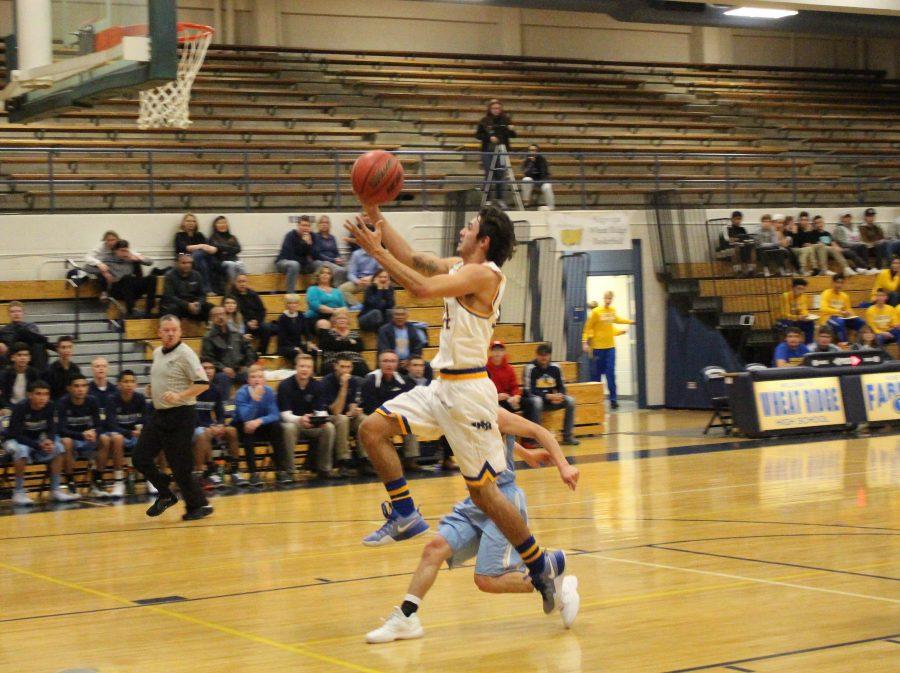 Carlos Shippley going up for a layup. Courtesy of Coleman Erickson

By Rachel Vigil
Students and parents crowded the gym on Dec. 6 for The Farmer’s first boys’ basketball game.
Unfortunately for the fans in attendance, the team shot but missed against Greeley West. Though the Farmers started off the game strong, Greeley soundly defeated them 65-54.

Immediately after the opening tip, Naishon Thomas, a junior at Wheat Ridge, got possession of the ball and scored for two in the opening 15 seconds of the game. The Farmer defense was initially strong, but Greeley West also did not allow for any points. As the quarter continued, Greeley scored their first point after rebounding the ball and breaking down the court. Wheat Ridge’s defense was unable to stop the point.

However, the second quarter was when struggles for Wheat Ridge began. At this point in the game, Wheat Ridge led in fouls, and began to incur bonus points for Greeley West. These bonus points are where Wheat Ridge began to lose their ability to catch up. Even when Wheat Ridge was consistently scoring, they were also consistently fouling and bringing Greeley to the line. Despite these setbacks, the game was still close for most of the quarter and went into the half with a score of 30-22.

From there, it only went downhill, the Farmers were unable to break Greeley West’s defense and resorted to fouls on their defense, resulting in more free throws and bonuses. The third quarter was initially promising with a few points for Wheat Ridge but got progressively worse. The Farmer defense was unable to prevent Greeley from scoring during this quarter. Near the end of the quarter, however, the luck of the Farmers seemed to be turning, as Cowan pulled off a few more shots before the clock ran out. They were still losing 47-37 this quarter.

Whatever momentum that was regained near the end of the third quarter did not carry on to the fourth and final one of the game. All of the Farmer’s scores were met by Greeley West. There were some impressive plays, including another three for Cowan and several made shots on Thomas’s part. Payton Dietrich, a senior, also made a three pointer for the Farmers. The defense was unable to keep whatever ground the Farmers had just regained and it continued to be a game with a difference of about ten points between the teams. Greeley began to keep the ball away from Wheat Ridge by dribbling and passing without taking any shots, effectively eating the clock away.

Wheat Ridge called a timeout with 12 seconds left, but were unable to score again, resulting in Greeley West winning the game, 65-54.

Where did the game go wrong? It seemed to happen in the second quarter, when Wheat Ridge lost so many bonus points. After that, they were simply unable to make any dent in Greeley West’s lead. Their defense was both unable to block Greeley West’s shots and unable to stop fouling, effectively killing their shot at victory.