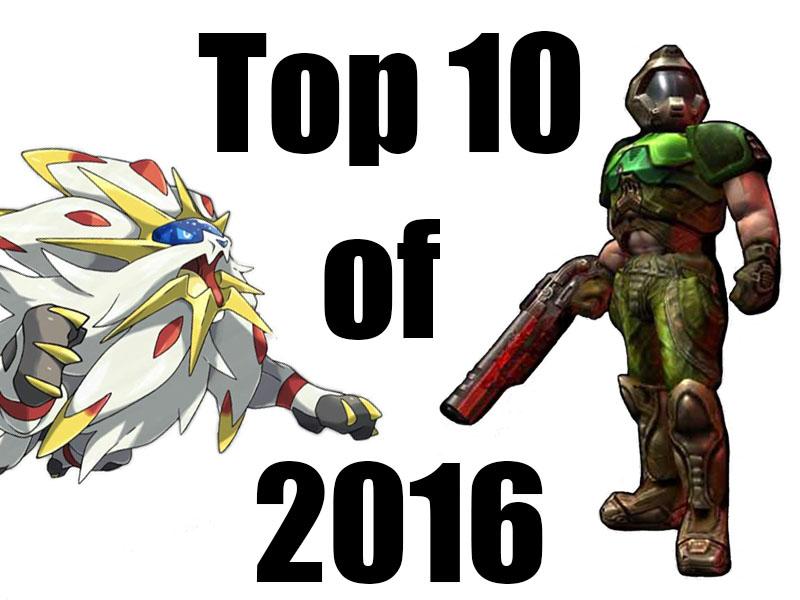 By Landon Stokes, Connor Gard, and Brendan Jordan
In the absence of many game releases in December, a handful of editors of The Haystack decided to create a list of our favorite games that released this year.
2016 was an interesting year for gaming, and we just managed to put together a list of the 10 best games we played this year, placed in no particular order.

Heralded as the first “3D” shooter, the original DOOM took the gaming world by storm when it released for DOS and Windows in 1993, and essentially created the shooter genre. After DOOM 3’s appearance in 2004, the series had lay dormant for 12 years, with most believing it to be over. This year’s self-titled reboot was an excellent revitalization of the classic shooter gameplay offered by the original. After years and years of Call of Duty and Battlefield-esque military shooters, it was an incredibly refreshing return to the roots of the shooter genre. Not to mention the game’s gorgeous design, old-school collectibles, and solid 60 frames-per-second gameplay on PS4. In my opinion, the best shooter released this year. -L

I did a review of Legion back in August when it came out and, I mentioned that I would’ve liked more time to play it before reviewing it since it was such a big expansion. After playing it for a few months now, I can safely say it’s the best Warcraft expansion I’ve ever played through. The endgame dungeons and raids are extremely fun to run through on higher difficulties, and the class relic weapons are lots of fun to upgrade via quests and loot drops. The actual storyline of the expansion is fun, too, and exploring the entirety of the Broken Isles to be able to run Mythic (high difficulty) dungeons never once felt like a chore. I will definitely be busy with Legion for a long time. – L

While not the most hardcore Dark Souls fan, the games are fantastically-crafted RPGs (role-playing games) and Bloodborne is one of my favorite games of all time. Dark Souls 3 turned out to be my favorite title from the core Souls series, with more viable builds, better replay value, and tons of fun weapons and locations to discover–not to mention a fair amount of difficulty. While essentially retelling the events of the first Dark Souls in a different place and time, Dark Souls 3 simply brought more of what fans wanted: Souls gameplay. Add in new enemies, fun-yet-grueling bosses, and better graphics and animations, and Dark Souls 3 comes out to be one of the best RPGs released this year. – L

Finding good indie titles can be extremely challenging at times, especially when platforms like Steam let just about anybody submit a .exe file and call it a video game. Furi is possibly the most polished indie title I’ve ever played, with a good mix of challenging gameplay, stylized graphics, and a less-than-cohesive (but still interesting) narrative. Furi is a bit different than standard games in that it consists entirely of fighting unique bosses with short walks in between as opposed to fighting your way through hordes of enemies for a boss fight. Each boss feels completely different to fight and has their own backstory, which they use in an attempt to influence the protagonist’s actions. While extremely fun, this game also tested my patience to the limits. Some of the boss fights are insanely challenging, and you will find yourself retrying them many times before being victorious. – L

If you’re an RPG fan like myself, you’re probably very familiar with Skyrim. Full of addicting gameplay, a vast, expansive world to explore, and tons of fun weapons and magic spells to use as well as legendary items and powers to discover, Skyrim finds itself in the hearts of many players–and for good reason. In the absence of a sixth Elder Scrolls title, Bethesda revisited its 2011 title and remastered it for the next generation of consoles. The special edition boasts upgraded textures, a more diverse color palette, volumetric lighting, and of course, Bethesda’s famous mod support for consoles. Sure, it’s still just Skyrim, but it comes with all of the downloadable content released for the original game, and for console players, a community-driven way to experience it. Even as a PC player, I enjoyed jumping back into the world of Skyrim once again and experiencing all the new features. -L

If you’re familiar with Nintendo, you’ve definitely heard of Pokémon. This year we had Pokémon Sun/Moon released bringing forth a multitude of new Pokémon, characters, and a new region to play in. At it’s core, Pokémon has not changed a whole lot over its course of 20 years, but it has stood the test of time with its entertaining gameplay, both through its adventure and RPG elements. Sun and Moon have put a better focus on story into the game, and have simplified many of its combat elements to help introduce and keep younger players in the series, without losing their longtime players. If you’d like to see my full review on Pokémon Sun/Moon, you can find it on wrhaystack.com. -C

With big shooters like Battlefield and Call of Duty constantly in the eyes of players in the shooter market, Blizzard put their hands in a new style of game— and nailed it. Overwatch steps away from the basic shooter style of eliminate-your-enemy with everyone serving the same purpose on the team, to the team-styled shooter. Much like Team Fortress 2, where the character you use makes a difference in gameplay and the successfulness of your team, Overwatch took that format and made it both quicker paced and accessible to players on both PC and console. This game is addicting to say the least, holding me to go above and beyond player level 100,  and has kept many players in its grasp since release. It takes complete strangers and puts them to work as a well-rounded team, completing different objectives put before them. It takes a truly great company to step into a new field and blow it away on their first try. -C

This year we had a lot of games that are very hands-on and require players’ undivided attention while playing, but Stardew Valley allows you a slower and more peaceful approach into the gaming scene. Stardew Valley is a calm RPG, giving you a ton of activities to do but at your own leisure without very many repercussions for goofing up. With many comparing it to the once popular Harvest Moon series, it is a game that takes you into the life of a farmer with other story-driven events around you with a season-based calendar that determines holidays and crops you can produce. However, instead of being put into a place with a somewhat organized space to grow your crops and tend to your animals, you are dumped on your grandfather’s old, beatdown farm, overgrown and trashed. It is up to you to clean up your farm and grow your crops to help you earn funds to improve your grounds and even automize your farm. Alongside your farm life, you can also go out into town and create relationships with townsfolk and help them out with favors they may need. The game offers you a nearly endless amount of activities to do, so delve in and have some fun with it. -C

Back in 2012, the first Dishonored brought to the table some of the best stealth/action gameplay yet seen, offering players tons of different pathways and the choice between stealth and brute force gameplay, which also meant a host of lethal and nonlethal weapons and magical abilities to use as you play as the main character, Corvo Attano, on his quest of revenge. I can happily say that the magic of the first entry is not lost in its sequel, but actually enhanced. Dishonored 2 moves the location from the dreary English city of Dunwall, to the vibrant-yet-sinister coastal city of Karnaca. It also features two protagonists, both of whom have their own intertwining story arc and abilities. While Corvo offers similar gameplay to its predecessor, players can now play as Lady Emily, whom Corvo rescued in the first game, as will as use her entirely new set of weapons and magical abilities. While the story is similar to the first one, Dishonored 2 provides an enticing narrative about love and revenge while keeping the fun of the original intact. – L

After 2011, the NHL sports gaming franchise went from being held by 2k and EA Sports, to just EA. Since then, there have been many ups and downs of the game series, including the dropping of the EA Sports Hockey League (EASHL) and my things taken away from the iconic “Be a Pro” mode. However, EA Sports gave NHL fans what they wanted, as NHL 17 was an absolutely enormous success compared to NHL 16. Adding the new World Cup of Hockey game mode, “Franchise” game mode, and the new controls for goaltending made this game way more interactive and fun to play for the franchise’s fans. Personally, I love going home everyday to work on my Hockey Ultimate Team (HUT) and playing “Franchise” as the owner of the Colorado Avalanche. NHL 17 itself is just a beautiful addition to this great game series and were all looking forward to the next addition. – B