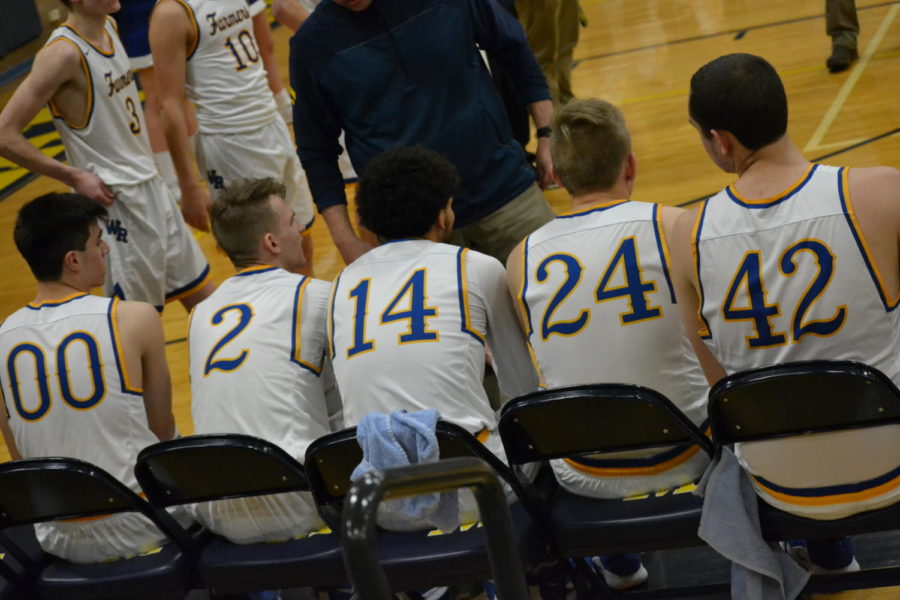 Friends and family gathered in the Barn Thursday night to cheer on the Wheat Ridge Farmers’ game against the Golden Demons.

For being the school’s last home game of the season, it was an exciting one. The Wheat Ridge Farmers are the 4A league champions of Jeffco with the Farmers winning with a score of 57-56. Senior Blair McVicker made the victory floater.

The pregame vibe was strong and everyone was very excited to get on the court and battle it out. The boys dressed up in fancy suits and showed their confidence throughout the day.

Sophomore Westin Miller said, “This is a big game. It is for the league championship and that is what we have worked for all year and we’re stepping in the right direction for the playoffs.” Scoring fast and protecting the three point line was crucial for this game.

At game time, the Farmers got the tip off and score quickly! Everyone was on their feet to watch a game that was going to be crazy, with both school student sections cheering to the point you couldn’t hear yourself think. With multiple lead changes throughout the first half caused for a crazy game. Farmers scored 18 points in the first quarter and 16 points in the second quarter, finishing the half 34-29.

Going into the second half Farmers were determined to get the win and bring the 4A championship home. The crowd was on their feet, and their cheering was deadening. The student sections for both schools were still cheering and making chants that go against each other.

The pressure was on for the final 16 minutes of the game.  Defense was strong and offence was even stronger in the third quarter. Moving into the fourth quarter, offense came out a little weak but the defense was stronger than ever for the Farmers. The offense only scored two points in the fourth quarter, and those points were the game winning floater by McVicker with less than ten seconds on the clock.

Leading stats for Thursday’s game, senior Julian Claussen scored 16 points and made five rebounds. McVicker lead the team in assists with seven throughout the game.

It was senior night in the Barn, so after all the chaos and after the buzzer went off, senior Isaiah Lucero mentioned: “Work as a team, win as a team. Go farmers!”  His stats for the game were seven points and three rebounds to help his team to this victory.

Also, senior Zeke Van Tuyl had an amazing last game with six points and seven rebounds. As his last regular season game as a Wheat Ridge Farmer he said: “It was a hard fought victory where every contribution mattered. I am so proud of my teammates for their effort and resilience that really lead us to victory.”

Everyone fought hard for this win and they are moving into the playoff with a first round bye. They will play Thomas Jefferson in the barn on Saturday, Feb 23 at 7pm. Come cheer on your Farmers to victory.