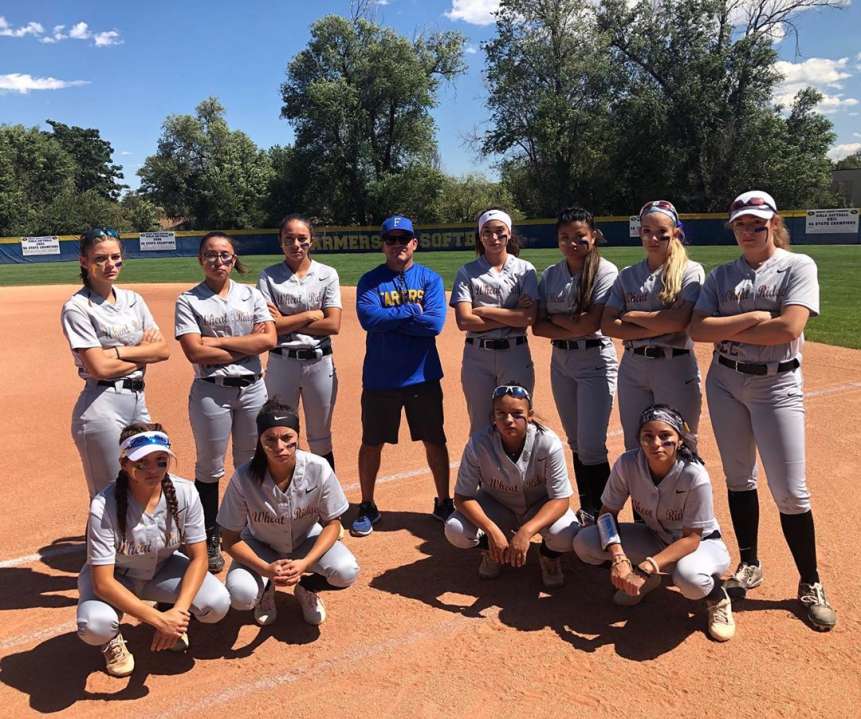 Farmer Softball getting serious before game.

Farmer softball got off to a great start, winning 23-1 in their first game of the season against Thomas Jefferson High School.
This recent win gave great confidence to the team and now they are feeling more pumped for future games. They finished the game in just three innings, which is very little for a regular length match. Every player on the team had a successful game with everyone getting at least one score.
Starting the first inning off strong, junior Aliyah Rothstein scored first, followed by many more strong hitters, like senior Izzie Quezada, and junior Carley Storrer, getting on base left and right. The Farmers only allowed  the Spartans to score once in the first inning. These girls took an outstanding lead in the first, 11-1. This first inning was a motivating way to start off the season, with many fans engaged in the game.

Moving into the second inning and getting on base right out the gate. The Wheat Ridge Farmers were on fire this game, and no one could put them out. This inning finished up, and the Farmers were still leading 21-1, not allowing The Spartans to score again.

Fans were on their feet as the third inning started. With the win in sight, all were anxious. The Farmers were playing with ease, having a 20-run lead. They kept the Spartans to no runs in the third inning. The Farmers scored two more runs this inning, leaving the final score 23-1 . The top scorer for the game was a tie between senior Izzie Quezada and Aliyah Rothstein with four runs. Rothstein also was the leader for RBIs this game with five.

I got the chance to sit down with a couple of the players and talked to them about their first game and the rest of the upcoming season. “I think we’re stronger and closer as a team this year. We’re a junior laden team with one senior so we have a lot of experienced girls who know what it’s about and what it takes,” said Rothstein.

When asked about what the team goal for the season is, junior YaMei Wilson said, “Our goal for the season is to obviously win state, but we know that’s not going to come easily. We’re going to work hard and make sure we play to our greatest potential and no matter what, they’re [teams playing against] going to remember playing Wheat Ridge this year.”

Wheat Ridge is going to be a very strong team this year. The Farmers are 4-1 after having a week full of games. Good luck, Farmers, and  have a killer season.