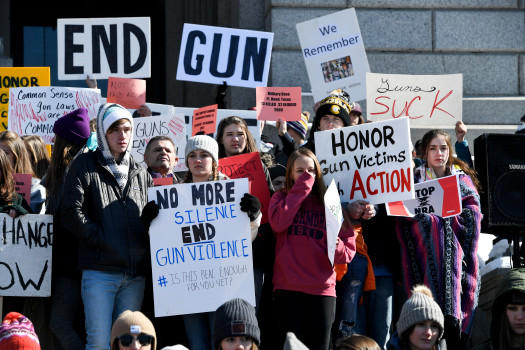 Students participating in the 2018 student walk-outs

Places like schools should be safe for children to learn and spend their time, but for many, this either isn’t true or it doesn’t feel like it is.
For example, for the teens who lost their lives to guns in shootings like Columbine, school was the farthest thing from safe. And for all the students who have to read article after article about how more students have died at the hands of guns, it’s hard to feel safe at school. I know that I definitely feel at risk while being at school.

According to the New York Time, just in 2017 in the United States alone, there were 39,773 deaths caused by firearms, excluding suicides by gun, which raises it to over 40,000. In 2017, Colorado saw a total of 779 gun deaths, reported the CDC. As of July 26, 2019, there have been 22 school shootings in the U.S., as stated by CNN. It is for this very reason that I ,personally, believe that some sort of action needs to be taken in terms of strengthening gun control. I would like to be able to not see a weekly, at least, news story about yet another act of gun violence that could have otherwise been avoided.

Currently in the United States, there are pieces of legislation in place to help combat inappropriate usage and purchasing of guns. Two of the biggest pieces are the gun control act of 1968 and the Brady Handgun Violence Protection Act. The aforementioned gun control act makes it so that there was strengthened licensing and regulation of firearms and made it so certain prohibited people would not be able to purchase any guns, including felons. This act was put in place following the assassination of President John F. Kennedy. The Brady Handgun Violence Protection Act was issued in the year 1993 and it was intended to strengthen the 1968 gun control act, starting the five day waiting period required for a firearm purchase done by an unlicensed individual. There are also pieces of legislation that are used to help those owning guns keep their distance from the government including the firearm owners protection act of 1986, which limited the amount of times a gun owner could be checked up on in a year. I feel that these pieces of legislation were good at making a change to gun laws, but there are numerous other things that the government can do to help strengthen gun laws and help protect regular U.S. citizens feel safer.

A hot topic in the debate over gun control is the issue of red flag laws. A red flag law indicates that law enforcement or a family member are able to contact the court in order to have a gun temporarily removed from individuals if they are suspected of being a danger to themselves or those around them. Seventeen U.S. states have these laws, including Colorado. A recent study done by psychologist Aaron Kivisto proved that these laws work in lessening firearm suicides in Connecticut and Indiana.

“Risk-based firearm seizure laws were associated with reduced population-level firearm suicide rates, and evidence for a replacement effect was mixed” said Kivisto in his study.

It is in my opinion that red flag laws should be enacted in all 50 states so that we can help bring down the ever-growing number of firearm suicides. Suicides make up around two-thirds of all gun deaths, so providing legislation that is proven to help in bringing these numbers down would greatly help the cause of limiting the deaths caused by guns. This, in my opinion, is a pretty cut-and-dry solution for many gun deaths. Red flag laws, in combination with more accessible and accepted mental health care for those experiencing suicidal thoughts, would be able to bring down the already high number of gun suicides.

I believe, in a more broad sense, that our future gun laws should look reminiscent of places like Japan. Japan has nearly eliminated gun deaths with the help of laws. These laws include exams prior to gun purchases, classes, mental health tests, and criminal records being looked at. Handguns are also outright banned in Japan. I think stronger background checks and more education on how to use guns and the risks attached to them will help make sure that guns only ever get put in the hands of those who can handle that power, and if these people turn out to be not what was thought originally, then red flag laws can help get guns out of the hands of dangerous people. Additionally, it’s been proven, by health professionals, that mental health is not the actual cause for mass shootings, so we know that controlling the amount and usage of guns should be our focus.

Ultimately I think that the way that people go about getting things like driving licenses, in which you do things like take classes and taking tests, should be applied to getting the right to have a gun. It should be highly regulated, and only the people who are educated should be able to own a gun. I think someone’s surroundings should also be taken into account, as in if the firearm they wish to possess is necessary for where they live. I believe all of these things will help in limiting gun deaths, which we all know is greatly needed.