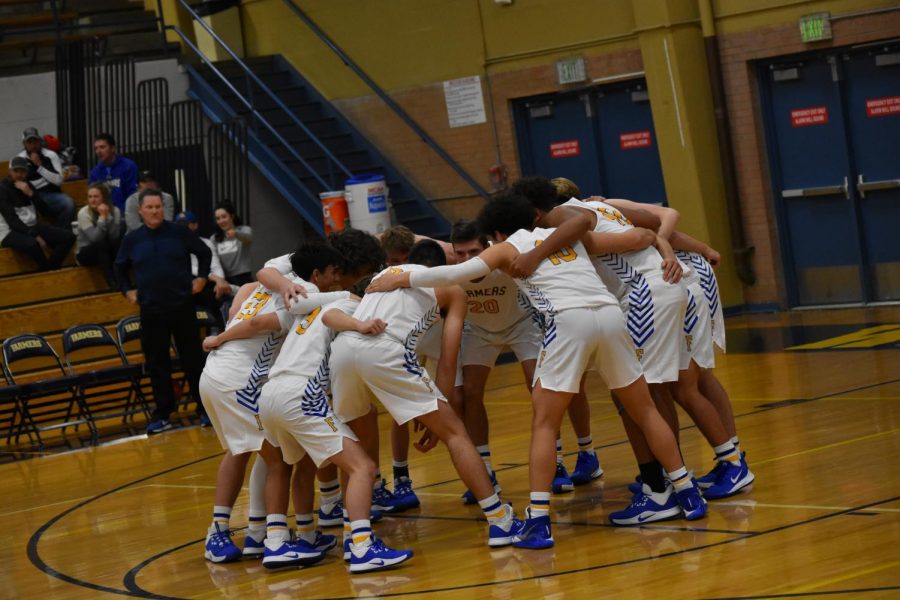 The Wheat Ridge Boys Basketball team getting ready to play.

Wheat Ridge boys basketball took the court Wednesday, Jan. 7 for the first game of the new year and the first league game of the year.
Coach Tommy Dowd said, “Green Mountain is third in the state. Guess who’s not ranked? But guess who is going to win?” As we all know, that would be the Farmers. The Farmers won 66-45 against the Rams, outscoring them in every quarter.

“It felt good to be back, over the break coach stressed defense, and we got after it and executed,” said Junior Grayson Van Tuyl about how it felt to be back on the court after the break.

In between quarters, the Wheat Ridge poms team gave a small dance to get people amped up and ready for the next quarter. Also, the Wheat Ridge cheer team did flips and other crazy stunts to hype the fans up.

During halftime, the poms team put on a fabulous dance that they put their hearts into. They have their regionals coming up soon, so good luck to them! As Wheat Ridge fans went and got refreshments, the crowd did fun cheers and got everyone ready for the start of the second half.

The third quarter got underway and the energy coming from the Wheat Ridge bleachers was electric. The Farmers came in with the same energy they had in the second. Fans were on their feet cheering and rooting for the Farmers. Wheat Ridge still outscored the Rams 17-15 during the third quarter. Ending the third, Wheat Ridge led 44-30. Defense is something that always comes in handy when you are playing against the number-three ranked team in the state.

Going into the fourth quarter, all the Farmers had in mind was finishing strong and taking home the win. The Farmers came out and played their best quarter of the game, scoring 22 points and holding the Rams to only 15 points.  With a minute remaining, the Wheat Ridge crowd roared with victory chants. The Farmers won 66-45 against the Rams.

“It felt great to beat the third thanked team in the state. We all knew going in that game we were better and we wanted to show that and we did,” said Van Tuyl

Wheat Ridge had some high scores in this game. The lead scorer was senior Alex Morales with 20 points. Morales also led the team in assists with four. Senior Dominic Bronk also had a high scoring game with 17 points. Bronk had a great rebound game with eight boards, he was aggressive in the paint. The two Wheat Ridge seniors had great games.

Congrats on the win, Farmers. Wheat Ridge is currently in first place in the 4A league.

“It’s our goal to be 4A champs again. There are some good teams in our league, but we think if we play our game at our tempo, we can beat anyone,” said Van Tuyl with confidence. Great luck Farmers. The next game is a rival match against the Golden Demons here in the Barn on Jan 22. Come show support!