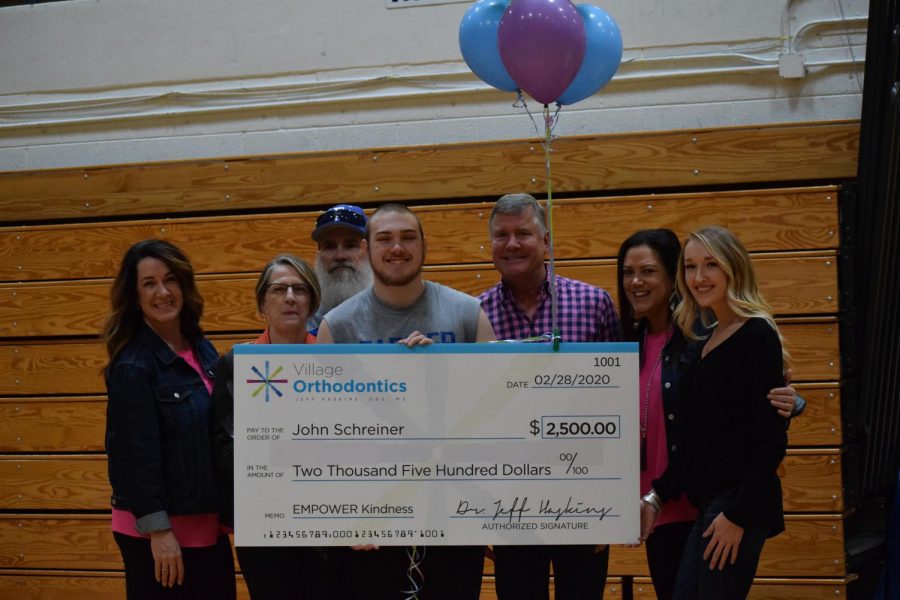 John Schreiner with his parents and the representatives for Village Orthodontics, presenting check

On Feb. 28, Wheat Ridge senior John Schreiner received a $2,500 scholarship for making an anti-bullying video for Village Orthodontics in an effort to empower others.
Schreiner is the first winner of this award, and it will forever be remembered in Farmer history and in his life.

When asked about the message he was trying to convey in his video, Schreiner said, “Make sure to know the difference between a bully and between friends when standing up to bullies, because friends joke with each other, but bullying is putting someone down to lift yourself up.” He always wants to make sure people are standing up for themselves and if anyone sees bullying happen he wants people to step in.

The EMPOWER Kindness award can be won by anyone. The organizers said they had video submissions from people that were as young as seven years old. Anyone can make a video or write an essay to help stand up to bullying and to get others to prevent bullying in any way they can–and win next year’s scholarship.

Schreiner is putting this money towards college at Colorado Mesa University where he will study film and business. He is at Warren Tech for TV video production and has a passion for it, so making a video was a perfect assignment for him.

“I was very much surprised,” he said when he walked into the big gym to cheers and confetti being thrown around by his fellow classmates. “I thought I was going to play kickball, which I was hyped about, but I’m cool with getting money instead of playing kickball.”

Congratulations again to John Schreiner on this amazing success. Farmers are so proud of Schreiner and what he has done for the school and anyone around him.