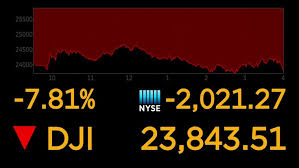 On Feb. 21, the Dow Jones industrial average, which is an index that tracks 30 large, publicly-owned blue chip companies trading on the New York Stock Exchange (NYSE), had a record-breaking fall of 3000 points in a whole day.
Many are saying it is because of the cut off on China’s factory labor due to Covid-19. This is old news now of course, but what has been the effect of this? In early March, the FED made $2 trillion dollars appear out of thin air to stabilize the DJIA for only a couple of days.
Many stories regarding the $2 trillion dollar bailout caught the attention of people all over America. Hundreds of thousands of people were outraged that what the government, mostly the right, had been saying about not having enough money for things like universal healthcare was a flat out lie. Of course, outrage can not last forever, so the drama died down after about two weeks but the damage was done.

The market continued to drop to 18,591 points on Mar. 23. This caused many places to cut pay and in some cases lay off employees.

Car dealerships have become desperate for business, for example, a 2014 Ford Focus with 60,000 miles was going for $4,000 dollars; this type of car would normally go for around $15-25,000. This wasn’t the only case, hundreds of dealerships were selling used and new cars for far cheaper than they would have in January.

On Mar. 27, the $2 trillion dollar Coronavirus stimulus bill was passed by Trump. The bill would give citizens who are eligible for a $1,200 relief check for things like rent and other financial support. Even kids under 16 who are eligible  can get a check with $500 for support.

A very hefty amount of that money will be going towards companies that failed to show proper money management, such as $29 billion dollars going to airlines and automotive vehicle manufacturers such as Ford getting 15.5 billion dollars. Though it may seem that the worst is over, media sources speculate that there could be a second fall in the DJIA because, historically,  it sells off when a problem is first identified, then rallies as the situation gets stabilized, and then falls again as the economic damage becomes clear. That’s what happened in 2008 and a much larger scale in 1929. The Stock Market is still going crazy  by going up and down more and more drastically though it has seemed to have reached a bit of a homeostasis. Covid-19 cases have started to flatten out even with the protests against the stay at home order. Of course, there is no way of knowing what will happen until it does, so hopefully, the CDC and Government will pull through. Until then, we will wait and continue to quarantine.