Protests Around the Nation: Black Lives Matter and Colorado 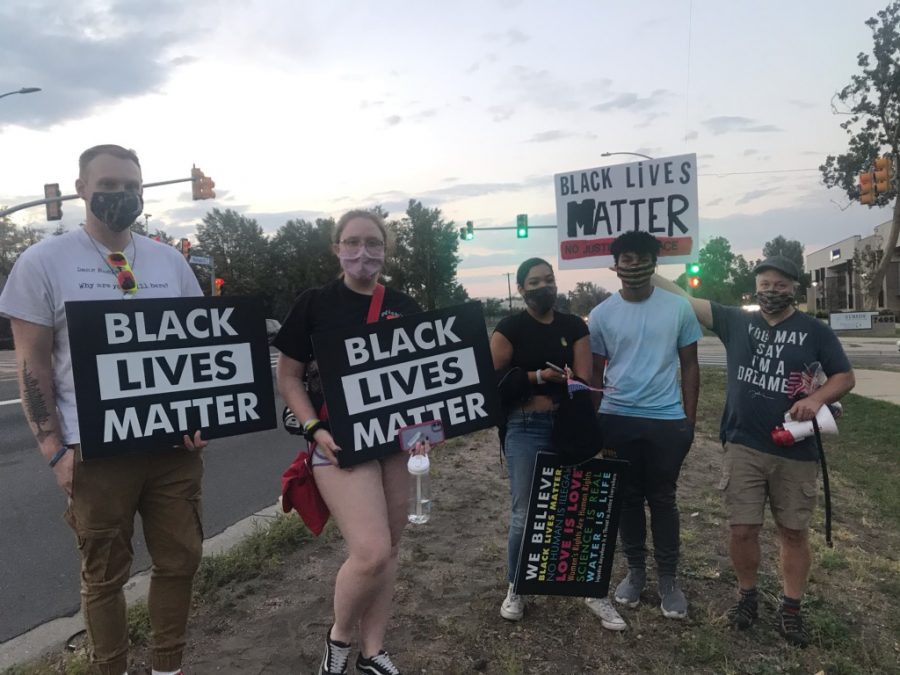 The past summer has been a whirlwind of different events that has shaken up how we live life and how we view the world around us. Besides the current COVID-19 pandemic, one of the largest events to happen was the start of the current Black Lives Matter protests, beginning after the death of a black man by the name of George Floyd at the hands of the police in Minnesota. His death occurred on May 25, 2020, after police officer Derek Chauvin pressed his knee against Floyd’s neck for 8 minutes and 46 seconds, a time that has now become synonymous with the protest movement.
Most of the protests getting coverage on pretty much all news sites are the ones going on downtown, seeing as they are the most aggressive and end up with the most conflict with the Denver police. But, on a more peaceful note, protests organized by Wheat Ridge local Morgan Richards, usually held on 38th Ave. and High Street, have stayed relatively calm, with young children even attending. The protests as of today (Sep. 22)  are being held at 29th Ave. and Wadsworth.

Richards said when asked why she wants to continue her fight for equality and justice for black Americans she points toward her politically active upbringing and her family.

“My family was always politically active and they raised us, you know, in the understanding that your community matters,” Richards said when asked about her passion for justice.

Richards’ family is also transracial, by way of adoption. This has allowed her to see clearly the amount of racism that is actually present in our society. She told me about a story that happened recently, in which a black couple went to ask for Clorox wipes during the stay-in-place order and were told there were no more wipes left in storage. The thing was that Richards had just gone back and purchased some. She ended up going and helping the couple with the employees denying them, giving a prime example of her own awareness of her white privilege.

Richards’ protests began on June 7 and were brought about because of the anger she felt when fully analyzing George Floyd’s death in the month prior. She hopes to help enact legislation that will provide more justice and better training for officers. If you want to know more about her fight, go to wheatridgeforequity.com.

She is just one example of a number of different people who have felt moved to protest for this matter. Her protests are different from most of the ones being the subject of news coverage due to the sheer lack of violence and police presence at them.

Recent Wheat Ridge High School graduate, Zara Bailey, is another member of our community whohas been very active in protesting. Bailey started getting involved with this specific movement after seeing how racism affected her POC friends.

“I’ve been going to protests for a myriad of different things for a while,” Bailey said about her past with political activism. Her first protests were the Women’s March and a Red for Ed rally for teachers pay.

Her main reason and purpose for participating is to bring awareness and attention to the often ignored issue of police brutality and racism in our current society. Much like Morgan Richards, Bailey hopes to work to have action items that would change the rules and regulations for police bias changing.

One of the things that Bailey encourages younger people who want to help in the movement but can’t necessarily protest is to do what makes them feel comfortable. She suggests that people can have conversations about BLM with their family and friends and bring more awareness to the issues. People can also spread links and petitions on an online level.

The protests at large began in the state of Floyd’s death, starting on May 26, the day following his death. Protesters were primarily calling for justice to be served to the officer who was responsible for Floyd’s death and the officers who did not respond to Floyd’s plea for Officer Chauvin to lift his knee. These protests were also a continuation of the larger Black Lives Matter (BLM) movement, which began in 2013, with the killing of 17 year old Trayvon Martin. This movement is an uncentralized group that is calling for equality and justice for black Americans and for an end to the number of black deaths at the hands of the police.

Another death that was one of the huge sparks of these protests was the death of a young black woman named Breonna Taylor, who was shot by police in Kentucky while in her home. The police were at this household as a part of a search warrant. There has been much controversy within this case, with some people saying it wasn’t murder and others saying that it was cold hearted and a needless death. Protesters have been calling for the arrest of Jonathan Mattingly, Brett Hankinson, and Myles Cosgrove, the officers involved with Taylor’s death. As of Sept. 24, no officers are being charged directly, causing a new wave of outrage.

The recent protests have oftentimes become violent, with riot like action. Many claim that most of this violence is incited by police, however, it is often very difficult to tell due to the chaos that arises. This has made these protests incredibly controversial and divisive on both ends of the spectrum. With police using rubber bullets and tear gas to subdue protesters and some protesters spraying graffiti and breaking windows, most people following the coverage have formed some sort of opinion.

Slowly, over the course of the summer, the protests spread to all 50 of the United States of America and then some. In those 50, our colorful Colorado is included. Protests here started on May 28, three days following Floyd’s death on the 25th.

Some more radical protests are calling for the complete abolishment of the police as a larger organization, with some only asking for the police to be defunded and for some of their responsibilities to be moved to organizations like social workers.

As time goes by, these protests are slowly getting more and more fuel for their passion and fire. Just recently, in Kenosha, Wisconsin, a black man by the name of Jacob Blake was shot by police several times over a domestic incident. This death, once again, brought about another wave of protesting, this time centralized in Kenosha.

No matter your opinion on this specific movement and their actions, it’s hard to deny the power that the participants have commanded. I mean, since back in May, these protesters have been one of the biggest and most talked about things covered by news organizations. It’s honestly hard to see an end insight unless something big happens in terms of police regulations or some form of governmental regulation. It will be incredibly interesting to see how the protest evolves and how the governmental figures in place will react. It’s sure to play some sort of part in the upcoming presidential election.