Gay Representation in Film and Book: a Brief Introduction 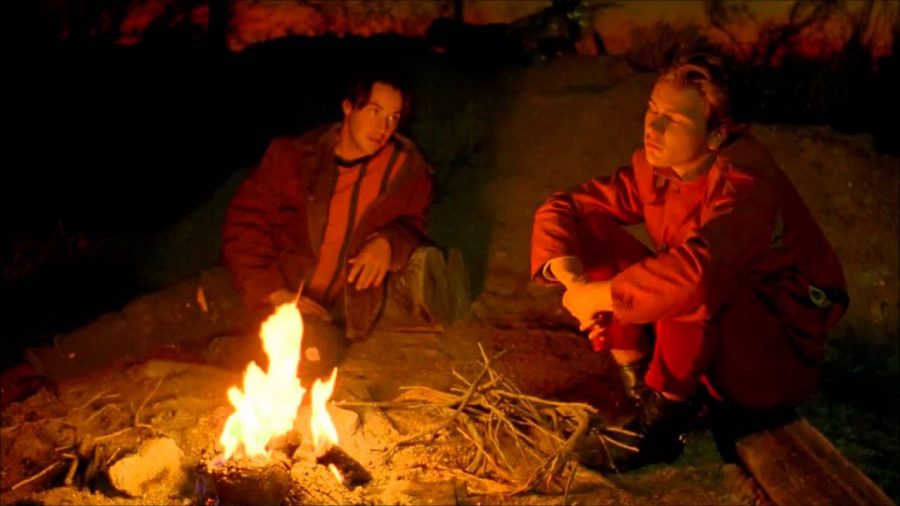 Screenshot of the pivotal "campfire scene" in My Own Private Idaho, featuring Keanu Reeves and River Phoenix.

For most straight people, it is hard to understand the struggles that LGBTQ+ individuals have gone through to gain the rights they have. It is possibly even harder to understand the struggles represented both on screen and on page. A lot of progress has been made, so I am going to give a short rundown of the “history” of queer representation in film and books.
One of the oldest forms of entertainment, books have been providing us with content for thousands of years and seems to never go out of style.

Queer subtext in novels has been present for hundreds of years and most of it relies on the reader’s interpretation of the text. Even back to ancient Greece, we see this in the Illiad. A number of people read the characters of Achilles and his close friend Patroclus as being queer and that the bond between the two is something stronger than platonic.

As a more concrete example of older queer lit, we can look to no other than the gay icon, Oscar Wilde. Wilde wrote a number of things, including plays and poems, but, if you’re looking for LGBT content, look to his only full-length novel, The Picture of Dorian Gray. This novel is about a man who sells his soul, in a way, in order to obtain eternal youth. It was censored before being fully published because of the sheer amount of gay content within the pages, but even in the censored version, which is the one most read today, the true nature of characters like the painter Basil Hallward is extremely evident.

Now, in the modern era, there are more LGBTQ novels than ever. one of my personal favorites is the 2012 coming-of-age story Aristotle and Dante Discover the Secrets of the Universe, which tells the story of two teen boys and their experiences growing up, as they discover their sexualities.

For film, the story is possibly even trickier. Most older films have characters, who were typically villains, who were queer-coded. Queer coding is when a character is written with certain stereotypes (or even just certain dialogue choices) so that the viewer sees them as queer, without outright stating this. You can see this phenomenon in films like The Little Mermaid, with its main villain, Ursula, being based on famous drag queen Divine. It is also present in any villain that is male and acts feminine and flamboyant, such as….

Depictions of gay characters that weren’t exclusively coded only began to pop up around the 1970s, with films such as Rocky Horror Picture Show and Cabaret, which both feature  out bisexual characters. In the ‘80s and ‘90s, most gay characters were either rather offensive stereotypes or were still only subtextual people. One of my favorite films that goes against this idea is Gus Van Sant’s 1991 film My Own Private Idaho, which is about two male street hustlers, played by Keanu Reeves and River Phoenix, who are attempting to find the latter’s mother. Phoenix’s character, Mike Waters, is openly queer (it isn’t completely labeled in the film) and is forthright  about his feelings for Reeves’ character, Scott Favor.

The 2000s have gotten significantly better when it comes to queer representation. Even back in 2005, with Brokeback Mountain (a film about hyper-masculine cowboys and the struggles they face being gay in a harsh and unforgiving society), things have gotten much better. Just in the past five  years, we’ve seen films that feature stories that haven’t been told nearly as much, such as Moonlight (a gorgeous 2016 film that is the life story of a gay, black man) and Portrait of a Lady on Fire (a period piece about a french painter and her subject and the love that they find in each other).

This only focuses on gay/lesbian representation, it doesn’t even mention anything about trans representation, which is still largely excluded from the majority of film and novels. It’s clear that there is still a lot of progress to be made and that we most certainly are not done improving the content we put on screen or page, but it is nice to see the improvements that have been made.