Farmers knock the Gators out of the Swamp 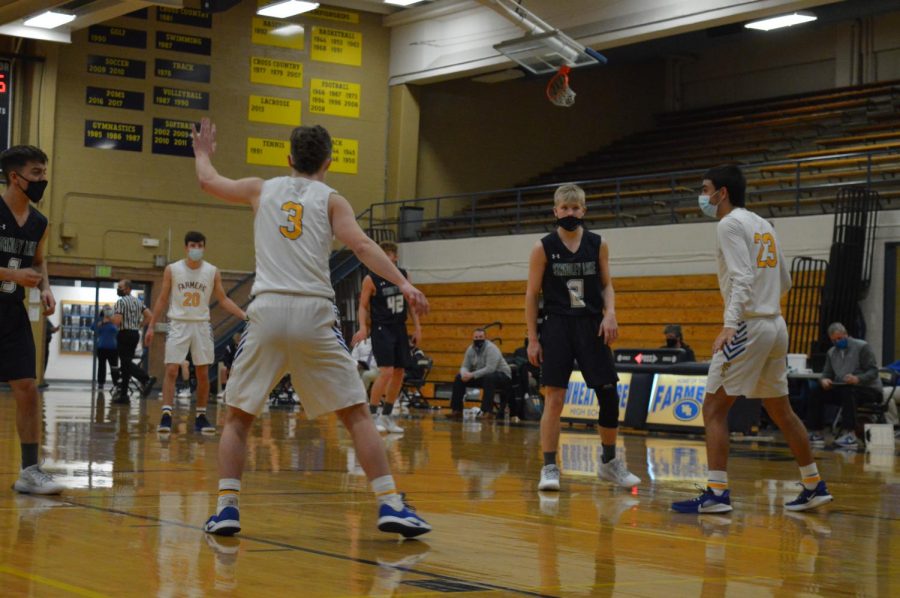 The Wheat Ridge Farmers took on the Standley Lake Gators on Feb. 5.
It was a back-and-forth game, especially going into half time. The Farmers won 54-39 after outscoring the Gators 29-12 in the second half. Their record improves to 4-1 and still undefeated in the Jeffco 4A league. Senior Westin Miller was the highest scorer of the night with 27 points.
The first-quarter broke out and the boys were ready. Even without bleachers full of fans cheering them on, they were pumping each other up and getting loud during gameplay. Miller made the first points of the game with a three in the corner. He hit three threes in the first quarter, getting him a quick nine points early. Standley Lake’s defense was really strong in the first quarter but not strong enough to get the lead in the first. The Farmers were on top 13-8 going into the second quarter.

Starting the second quarter, the Farmers were ready to go. The Gators came out strong. Senior Jake Latzer got an assist from junior Silas Von to get a quick two for the Gators. Latzer also got the “and one” opportunity. But senior Kale Kissle answered right back with a quick rebound lay-in. Gators kept scoring and so did the Farmers. With four minutes left to go in the half, the Gators went on a 9-0 scoring run, putting them up 27-25 going into halftime.

At halftime, Miller led the Farmers with 15 points, all in three’s. “I felt comfortable with my shot, and my teammates trusted me to make shots. They [The Gators] left me open, so I just took the shots,” said Miller on getting five three’s in the first half. For the Gators, Von had eight points in the first half, going two for three from the free-throw line.

Heading into the third quarter, the Farmers were ready to make a comeback. Standley Lake’s Von scored first at the start of the half. The Farmer’s first points didn’t come until five minutes left in the quarter by senior Dominic Cross at the free-throw line. The Farmers knew they couldn’t fall much more behind, so they went on a 10-3 scoring run to end the quarter to retake the lead 39-34. Cross led scores in the third with six and going two for two, for free-throws. Farmers held the Gators to only seven points in the third quarter.

Miller was the player of the game, having 27 points with 21 of those points coming from beyond the three-point line. He also went six for nine from the free-throw line. His senior season on basketball, but Miller is making the most of it; “It’s just good to be back playing basketball again and getting some good time with my friends and my teammates and my coaches.”

Wheat Ridge hopes to continue their four-game winning streak on Monday, Feb. 8 against Evergreen High School in their fourth league game of the season. Tune into NFHS to watch the game and tune into The Farmers Sports Network to watch the girls take on Evergreen at home. Catch all home games on the Farmers Sports Network! Great luck for the rest of the season Farmers and stay safe!