Young Live-streamer Becomes Most Subscribed to Person on Twitch 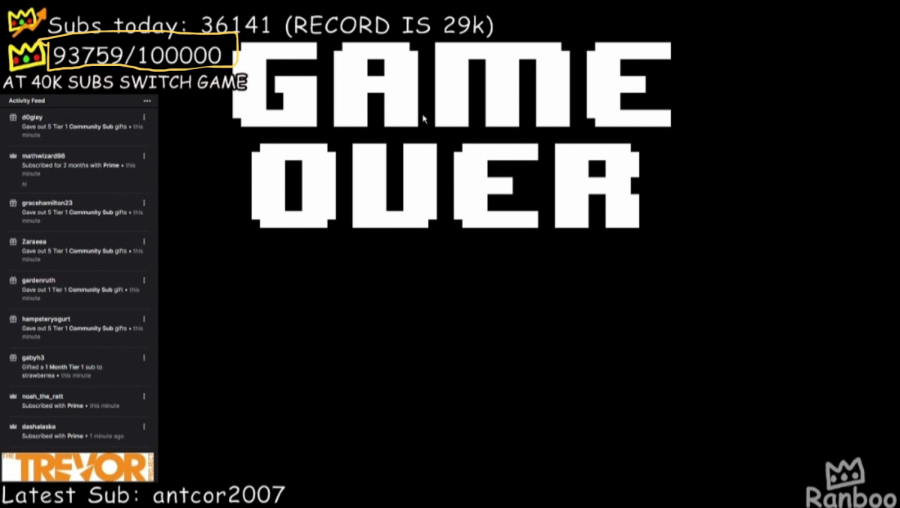 Screenshot from early in the stream, while Ranboo was playing the game Undertale

Twitch, for the unknowing, is a platform online used for livestreaming a wide variety of topics, with the biggest being video games, like Minecraft and Fortnite. The ages of these streamers vary from the middle ages to as young as 16.
One such streamer who is currently climbing the ladder of success is a teenager nicknamed Ranboo. First of all, before I continue, it is important to note that Ranboo only goes by that name as to protect his identity; he has also not revealed his age (we only know he is a minor), once again to protect his privacy.
Ranboo began streaming back in September of 2020 and has already become the number one twitch streamer with active subscribers. On Twitch, subscribers pay a small fee of around five to six dollars in order to gain benefits for a streamer, such as emotes and no ads before a stream.

To reach this spot, Ranboo, on Feb. 20, held a 12-hour-long sub-a-thon. All proceeds made during this livestream out of subscriptions and donations was donated to the Trevor Project, which is an organization that gives resources to LGBTQ+ teens.

On a more personal note, this stream meant the world to me and a number of other Ranboo fans. A large majority of his fanbase identifies as queer, so for him to spend these twelve hours making money for an organization, rather than for himself, rmeant the world to so many people.

During this stream, Ranboo broke a number of personal records as well as site wide records. In those twelve hours, Ranboo had the largest amount of subs in one stream, streamer with the most active subscribers, potentially the fastest growth of a streamer ever, amongst a few other Twitch-based records.

To summarize, Ranboo has grown so much in the past months that he has been streaming, and, as a newer fan, I am so glad I found him. He has taken this new-found fame and created a community where everyone can feel safe being themselves. I’m excited to see where he goes from here and see how much more growth he will have.