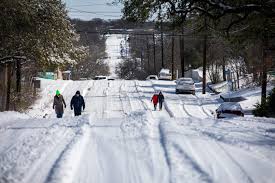 Climate change is real, and it is an extremely current and life-threatening issue. I’m starting off so strong here because everything has gotten so bad that we need to be this straightforward and harsh.
People can see the very real effects of climate change right in front of them.

Specifically last week, Texas was ravaged by extremely harsh cold and intense snow. Texas is not a state built for any kind of cold weather, let alone this harsh of it.

Texas averages around 60 degrees Fahrenheit throughout the year. In the week of Feb. 15 to 19, this was far from true, with the lowest high being about 9 degrees. Clearly, this type of weather is not normal for this area. It has taken a toll on Texas residents’ lives and houses, and it’s incredibly hard to see how bad things have gotten for them.

This is a result of climate change, and it is a clear example of what will happen if we don’t do anything to try and fix any of these problems. If anybody didn’t fully realize how serious this is, hopefully, this proves it to them.

Scientists have been stating the correlation between climate change and this winter storm. While these temperatures are not unheard of in Texas, they were exceedingly uncommon, which has been a highlight of different scientists. For example, in an interview with NPR, James Marshall Shepherd, director atmospheric sciences program at University of Georgia, stated that it’s less about climate change being the direct cause and more so that climate change will make more extreme weather events much more common.

In an interview with the Guardian, director of seasonal forecasting at Atmospheric and Environmental Research, Judah Cohen, stated “This is happening not in spite of climate change, it’s in part due to climate change”.

People in Texas are currently caught without heat and power and are barely being able to live, let alone comfortably. To us, as people who live somewhere where snow like this is incredibly common and the norm, it’s hard to understand how it could get this bad. That’s why it’s important to understand that our homes and state are built to withstand this kind of weather, but somewhere like Texas is only built upon the idea that it will stay warm and sunny, not freezing and snowing.

This is alarming because this could start a trend of out-of-place weather in different places and I honestly think we will see more events like Texas this past month. Climate change is creating real and ever-present effects and I think that this is simply just the beginning. Stay safe out there.