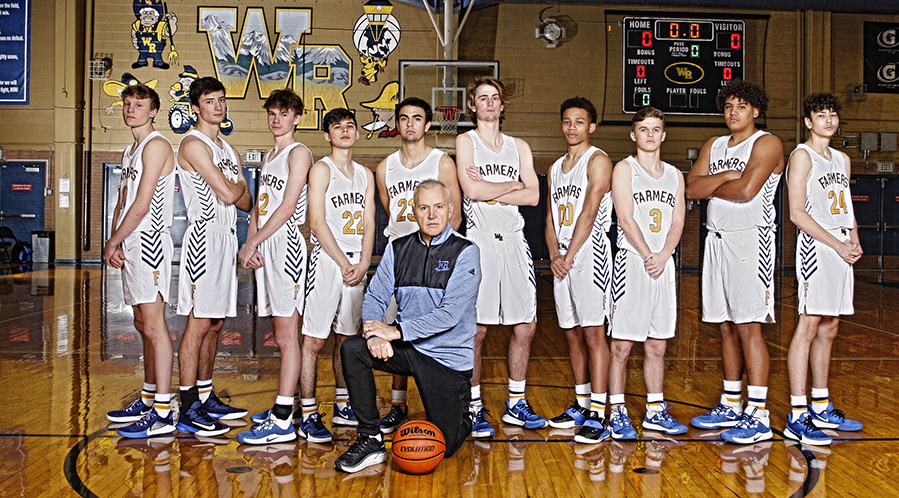 The Barn welcomed family and friends in for the final home game for Wheat Ridge boys basketball on March 1. For the Farmers’ senior night, they congratulated and recognized all 10 seniors on the team.  Thank you, #00, Jeremiah Pennix; #2, Haydon Powers; #3, Westin Miller; #10, Kale Kissle; #20, Scotty Kingman; #22, Francisco Meastas; #23, Dominic Cross; #24, Logan Ewers; #33 Max Olson; and #42, Chris Smith, for all of your hard work and dedication this crazy season.

These boys dominated the Littleton Lions, sending them back home with a loss. The Farmers won 65-30, holding the Lions to under 10 points made per quarter. The top scorer for Wheat Ridge was Miller with 17 points, 15 of which were three-pointers.

The first quarter started off sluggish for both the Farmers and the Lions, missing easy lay-in shots back and forth. The first quarter jitters were definitely present after an emotional senior ceremony. The Farmers allowed the Lions to get the first basket, but that basket was going to be one of their last of this first quarter. Wheat Ridge went on a 7-0 scoring run after Littleton scored that basket, leaving 90 seconds left on the clock. Farmers led 9-6 going into the fourth.

The Farmers needed to turn it around if they wanted to win this game. And that is exactly what they did. Kissle was stealing the ball and poking it away left and right. Ewers, off the bench, came out and scored 10 points very quickly. “It’s that Mamba Mentality,” Ewers stated. “Once I get in that zone, I just keep pushing the ball. I don’t really care how tired I am, I just keep going.” The Farmers went on an 11-2 run, only allowing the Lions to score eight points while they scored 22. Wheat Ridge leads 31-14 heading into the half.

Senior Night also included our Wheat Ridge Spirit Squad. It was their first live performance for the halftime show. The Spirit Squad has two seniors, Noel Hart and Taylor Sandoval. The team put on an amazing performance for all of the friends and family in the stands. “It felt really good to come out. It felt good to come out and do something normal,” said Sandoval about being able to come out and cheer on their boys for their final game. They are just at the start of their competition season, so best of luck ladies! Wheat Ridge Cheer made an appearance for the fans at home, thank you to them for their beautiful recorded performance as well.

Farmers went back in action with Smith being sent to the line to shoot two. After allowing the Lions to go on a 0-4 scoring run over two minutes, the Farmers caused Littleton to travel, forcing a turnover. That turnover turned into three points for Miller off of the assist from Cross. Those points allowed the Farmers to go on a 9-3 scoring run after amazing defensive stops and offensive plays. Once again, Wheat Ridge only allowed eight points scored in that quarter from  Littleton. Farmers led the Lions 50-22 heading into the final quarter of their final home game.

The boys were ready to pack up the L for Littleton and send them home with it. Littleton scored first, but that didn’t stop Miller from answering back with a three-pointer. The Lions got their only eight points of the quarter quite early. The Farmers didn’t allow them to score any more after the 4:40 mark. From then on, it was all Wheat Ridge scoring, a three from Powers, two threes from Miller, and two quick layins from Meastas. Wheat Ridge won it 65-30!

Miller and Ewers combined for 32 points, making up for about half of the points from Wheat Ridge. Ewers had an outstanding game, coming off of the bench and scoring 15 points. He gave some inspiring words of wisdom to the underclassmen on the team that are going to take his spot next year, “never give up. I was mostly on JV my junior year, but I stepped it up for my senior year, and I’m dropping 15 off of the bench. Anything is possible.”

Good luck in the playoffs boys, make your school proud! You can catch the final girls’ game and their senior night against the D’Evelyn Jaguars on the Farmers Sports Network, Coverage starts around 7 p.m. Wednesday, March 3. See you there. Good luck Wheat Ridge Sports!