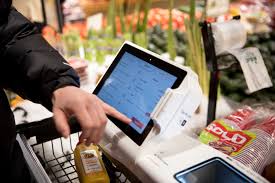 As 2021 begins, Kroger introduces a new special kind of way of shopping. At the beginning of January, Kroger began to test out these smart carts, which are being called the “Krogo Carts,” and began to explain what kind of benefits these new carts would have. Some of these benefits are very good to some, but could be very bad to others. These new carts could go as far as to get rid of self-checkout as a whole, and maybe even get rid of check out stands as well, which would cost many jobs. So far, these carts have only been tested in Kroger’s main stores in Cincinnati, Ohio, and it is still unclear when these carts will soon make their way towards other Kroger stores, like King Soopers, Gerbes, and more.

According to Kroger, this smart cart already proves to have many successful qualities in the cart that will really help those who prefer the least contact possible while shopping, along with being able to scan and bag your groceries in the cart itself. The cart comes with a screen, along with a machine used for payment at the end of the transaction, and comes with a little tray in front of the screen and a machine for your personal items to be separate.

The cart does not come with bags, but reusable bags are used for this very reason and can hold your groceries after you scan them on the screen.

The cart wouldn’t really be possible without Caper AI, which is a company that helps make self-checkout easier by making it so you can shop and pay for all your groceries just with your own shopping cart, which will be very helpful during crazy times during store hours, when lines do happen to get long and crazy. But, while this cart does have very nice and helpful qualities, it is still unsure of how this cart will benefit others and even Kroger stores themselves. Jenna Martinez, a Courtesy Clerk at King Soopers, and also a member of the Haystack staff, stated that she likes the idea, and it won’t get rid of the self checkout as a whole, and shopping will be as easy as uploading everything and paying.

Because the cart is being tested, many have concerns about what the cart will bring. With this cart, it will make checkout in the stores easier for the customers and employees, and depending on how useful these carts are, and how many people use them, jobs could be lost in the Kroger stores, as fewer cashiers and baggers would be needed, and would probably be paid much less than before. In fact, Jon Bertheaud, a cashier at a fellow King Soopers, believes that this way of shopping won’t last long, and won’t be very effective in the beginning because the carts will have a chance of getting stolen or damaged, which can cause a lot of problems with shopping. And even if Kroger sends the carts out as soon as next year, there will still be many bugs and problems throughout the years that could take years to be fixed.

In the end, this new smart cart technology could either really help everyone with shopping, make it worse, or begin a new generation where grocery shopping is all done by the customer. Based on the fact we are still in a pandemic, this cart would be very useful because it would help encourage social distancing even more as the interaction with customers to employees would decrease a lot, but afterward, when everything returns to a semi-normal, it is confusing and concerning to see what this cart would do to help when no rules are set in place for distancing, masks, and germs.