What the Chauvin Trial Verdict Could Mean for the Future 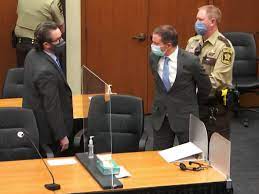 The murder of Black American George Floyd back in May of 2020 at the hands of Minneapolis police officers kick started the now massive Black Lives Matter movement and protests. The actual officer responsible for his death is a man named Derek Chauvin. He was on trial for murder, facing three different charges, from March 29, 2021 to April 20, 2021, with the jury going back to deliberate on the 19th.
This trial saw a number of different testimonies from witnesses who were at the scene of the death and people close to both Floyd and Chauvin. A number of Chauvin’s past co-workers testified against him, including the senior officer Lt. Richard Zimmerman at the Minneapolis Police Department. There were also testimonies from minors, including the teenaged girl whosevideo of the murder went viral online.

As of April 21, Chauvin has been found guilty of all three charges, second degree and third degree murder and manslaughter. He is currently being held in a high security prison, awaiting sentencing.

This was a monumental descion from the court, simply because of how few police are actually convicted of anything after they commit murder. Following the decision, people were seen celebrating outside of the court, celebrating the fact that there was justice for Floyd and that the months and months of protesting had paid off, even on this smaller scale.

A case with a very different result was that of the beating of Rodney King back in 1991. Following a police chase due to King speeding, he was beaten by four members of the LAPD, with officers saying that King was resisting arrest. The subsequent trial for the officers ended with all four being acquitted of their charges.

A film director who was in the court that day said that this decision “lit a fuse” and I think we are currently seeing the bomb. People are finally noticing what has been happening for years. According to the Washington Post, upwards of 1,000 people are fatally shot by police. However, according to Vox, only about 130 police have been arrested for murder since 2005. Clearly, there is a huge discrepancy there and that’s the exact reason people are protesting.

The major hope that people have for the future following this trial is that it will help instigate far more larger scale change in the United States justice and policing systems. I think changes brought about by this trial are already beginning to be seen. Currently the Minneapolis police department is being investigated by the Department of Justice in order to fully catalogue any issues that may be present.

On a more personal level, my main concern is that non-Black people will be satisfied with only this amount of change. I’m worried that people, specifically White people, will become complacent with the policing system and police brutality following this conviction.

The important thing to take away from this trial is that protesting works and that now is not the time to lose steam and stop fighting. Don’t become complacent just because these things are not happening directly to you. Keep making noise and keep forcing change to happen.