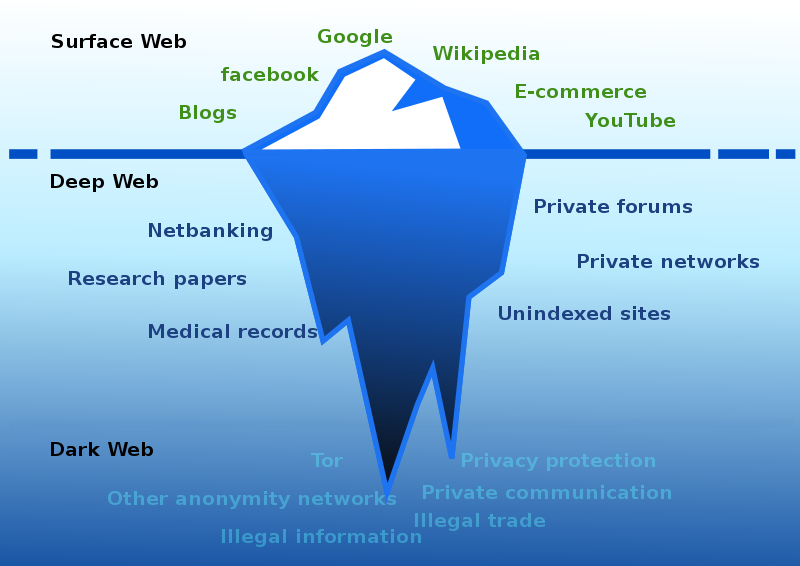 Iceberg image illustrating the different areas of the internet

The internet is much more than just what we see when we go on to Google or Yahoo. That part of the web is called the “surface web,” and it includes everything that the average person can access and view. The surface web only makes up a small percent of what is online. The rest of the online world is dubbed the “deep” web and/or the “dark” web.
The dark web is home to everything from drug selling and trading to illegal pornography. Certain aspects of it also house private documents used by places such as hospitals and public records offices.

The dark web has quite a reputation for being terrifying and a nightmarish place with danger at every click, and, while this definitely isn’t completely true, there are plenty of disgusting sites there. The biggest offense is the sheer amount of exploitative content regarding children, including both photography and videos of child pornography (CP).

Personally, I think that this is one of the most vile and disgusting crimes. I think it is irredeemably evil to prowl on innocent children who don’t even understand what is happening to them and are just trying to grow up.

Just this week, German police have conducted a bust on one of the biggest CP websites on the internet. This site, called “boystown,” had upwards of four hundred thousand active users, three of which have been arrested in connection to the site. The three arrested individuals are a 40-year-old man, a 49-year-old man, and a 58-year-old man, who were all operating the site during several raids. All three of the men were from Germany, with one living in South America for the past few years.

This is a huge deal, considering how hard it is to make arrests based upon the internet. Anonymity is one of the biggest perks of the internet, especially in the dark web. The way that the dark web operates is that the person’s internet signal and their location is bounced around different towers, in order to ensure that they can’t be caught and their true identity is not visible to fellow users, so to bust a site and arrest a few individuals is a very exciting prospect.

Hopefully, these arrests will help kickstart a trend of more CP sites being brought done. The children who are exploited by these people deserve justice and the perpetrators deserve to rot in prison. The unfortunate thing is that most police investigations regarding the dark web are related to drugs and the selling of illegal substances, so, maybe with this success, some focus will be put on other crimes being committed online.