Money makes the world go around 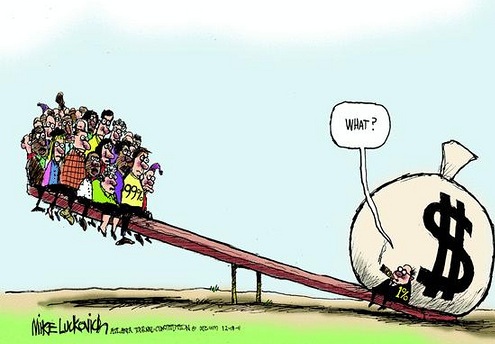 With the rise in the cost of living, you might be thinking how has this come about and is it equal throughout our economy?

What is income inequality?

income inequality is where income is distributed unequally. Income inequality makes up a capitalist society, and America is a perfect example of a capitalist society. However, when the gap becomes too big it becomes a problem. This hurts economic growth, especially high inequality in rich nations. That makes less productive employees, which means lower wages, which means lower overall participation in the economy. When people do not make money, they don’t buy things. When we buy things, it adds to our country’s overall economy. While this pause in our economy obviously bad news for poor families, it also hurts the upper class.

When and how did the gap become too big?

As we know before the Great Depression there was a period referred to as “The Roaring ‘20s.” It was a great period for America, a decade of economic growth and widespread prosperity, and a rapid growth of consumer goods. During the 1920s, the U.S. stock market underwent rapid growth; in August of 1929 the stock market had reached its peak after a period of wild speculation during the Roaring Twenties. By that time, production had decreased and the unemployment rate was rising, leaving stocks in greater excess of their value. Which led to the crash of the stock market around September early October 1929 and then stock prices began their decline on October 24th. What was the effect after October 24th?

Black Thursday, a record 12,894,650 shares were traded. Investment companies and leading bankers attempted to stabilize the market by buying up great blocks of stock, producing a moderate rally on Friday. Then Black Monday was followed by black Tuesday in which stock markets collapsed and completely crashed. Ultimately this all led to bank failures. Less money and increased borrowing caused firms to cut back on prices and lay off workers.

How did the economy recover?

After Franklin D Roosevelt took office in 1933, he was able to stabilize banking systems. FDR abandoned the golden standards (the golden standards are known as the monetary system where a country’s currency or paper money has a value directly linked to gold). FDR’s actions freed the Federal Reserve to expand the money supply, this slowed the downward spiral of price deflation and began a long slow crawl to economic recovery. Programs were out into place.

Programs such as, Reconstruction Finance Corporation: The RFC authorized up to 2 billion for emergency financing for banks, like insurance companies, railroads, and other large businesses. Other programs like PWA ( Public Works administrators) created 40 million jobs and spent 4 billion in construction of 70% of the nation’s new buildings. FDR managed to get Americans’ money supply increased by 42%.

Even though the economy began to recover in the second quarter of 1933, The recovery largely stalled for most of 1934 and 1935. America has still yet to make a full recovery and with covid hitting that recovery is hopefully long in the future. After covid we saw retail sales, which primarily track sales of consumer goods, decline by 8.7 percent from February to March 2020. The unemployment rate has increased across all economy’s not just Americas, Covid is taking a big effect on the whole world and their economic system. However in the United States, The proportion of people out of jobs hit a total of 8.9%. We keep seeing recurring patterns throughout history, of covid-19 is a big deal since it is a virus. However, seeing the rates and status of our economy we can compare it to how our economy originally fell. I originally brought up income inequality cause it ties in with our economy and the fall and unemployment.

Where can I go to get more information?

if you’d like to learn more about the situation I’ve listed some links of sources and websites to visit so you can do so. Or feel free to do your own research.

6 facts about economic inequality in the U.S.