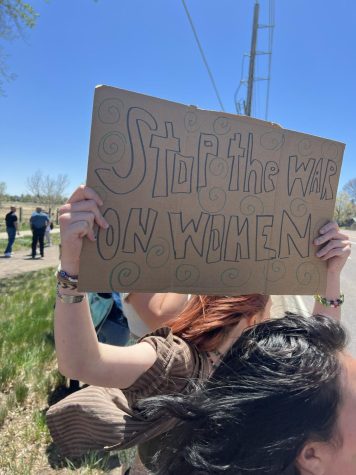 On Thursday, May 12, many students here at Wheat Ridge High School organized and participated in a student walkout in protest of the announcement that the 1973 Roe v. Wade Supreme Court decision would be overturned. For those who don’t know, Roe v. Wade is the name of a lawsuit that led to the 1973 Supreme Court decision that established a constitutional right to abortion in the United States.

Overturning Roe v. Wade would mean that federal abortion protections would end, this means that every state in the United States can legally choose to ban abortion in their state. This would mean that states could make laws to arrest or even imprison women for having abortions, trying to give themselves an at-home abortion (at-home abortions also raise the risk for injury and possibly death), or even for having a miscarriage. The decision to overturn this legislation is being made by men who have no personal experience with what goes into getting an abortion or what it is like to go through the dilemma of whether or not to get an abortion; these legislators making laws controlling what women can and can’t do with their own bodies is sending us back in time as a society and the purpose of the walkout was to make our voices heard about how unjust it is.

Many of us here at the Haystack participated in the walkout, as a matter of fact. Overall, I think the walkout was a great success. Sure we made people furious at times, but the support for us definitely outweighed the hate.

Now as I am sure, we all understand that not everyone who attended the walkout was actually there to protest. Some people only participated to get out of school or hang out with their

friends or something, but the thing I found most interesting was that some of the people who were there to protest didn’t even fully know what they were protesting.

When I got to the protest there were at least 100 people out there, and I was like “Wow! This is an amazing turnout!” But not even two minutes in, people were chanting messages that had nothing to do with what we were protesting against. People were saying things like “kill that fetus!” or “fuck them kids!”.  I wasn’t the only one who was taken aback by hearing this, whenever you think of a protest like this happening, the goal is to get the message across to people outside of the protest, but during this walkout, I found myself and others having to educate the people protesting with us on what we were actually protesting for.

It was interesting to see the progression of the protest, seeing who left, seeing who stayed, seeing who actually came to protest. And even though we live in Colorado, a state that recently passed legislation to l make sure abortion is always available to the women in Colorado who need it, our school played a small part in a big picture issue. It was powerful to see how many people cared about this issue, and how many people in our local community felt about us protesting. It was a good note to end the year protesting for women’s rights.